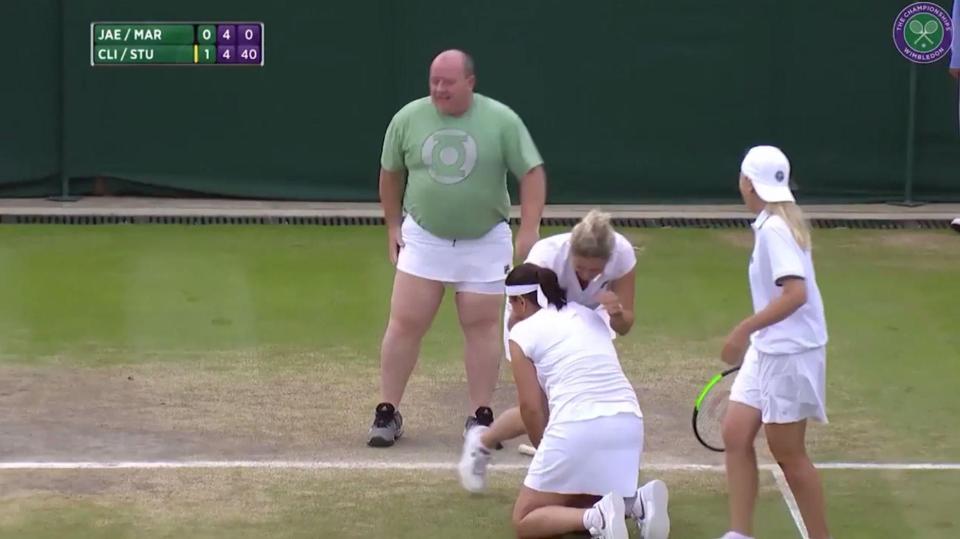 We all remember Kim Clijsters’ monster serve during her successful career at the top of the women’s rankings. Well, a member of the public has lived out his boyhood dream of playing on the hallowed turf at Wimbledon in the closing days of this year’s tournament.

Playing a legends’ exhibition match, it seems Clijsters hasn’t lost much of her first serve prowess. When playfully seeking council with teammate, Aussie Renee Stubbs, as to the positioning of her next serve, a male yelled from the crowd that it should come at the body.

Used as a tactic in tennis, not only do ‘body serves’ put the receiver on the back foot, but also in two minds as either a forehand or a backhand can be used in return. The player must decide quickly which way to move to accommodate the stroke. To boot, with served coming down at 160+ clicks, they’re bloody scary! The man identified as Chris Quinn from Ireland shouted the advice from the front row. The Belgian was quick to take up his advice, but insisted he would be the one to receive. There is already one mouthy Irishman who is holding the world’s attention.

Invited onto the court, the portly chap looked quite comfortable holding the racquet, but out of place in his baggy shorts and ninja turtle green t-shirt. He was consequently handed a white skirt and top in compliance with Wimbledon’s famous dress code for players. The crowd looked on in amazement as he struggled with the task of squeezing into the tight fitting attire. But once clothed, he did pretty well to get a racquet on a full blooded fire bolt delivered by Hewitt’s ex! Quinn was a great sport during the debacle as he kept the crowd and his new teammates in hysterics. the light-hearted departure from the match has gained worldwide attention. Chris, being the good bloke that he is, is auctioning the skirt off for charity.

"That's a man. In a skirt. Trying to return Kim Clijsters' serve"