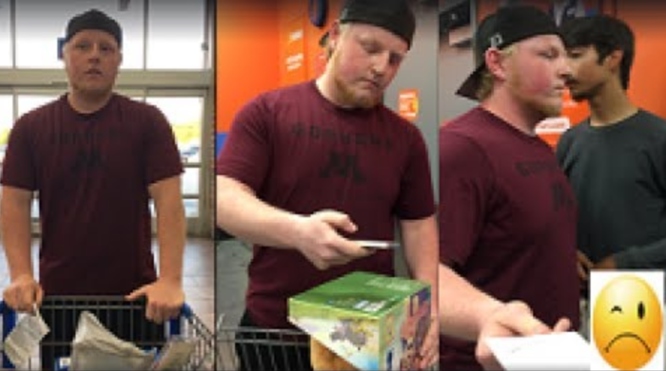 Walmart is a massive chain of wondrous department stores. Each store is bloody huge and filled to the brim with basically anything you could need! If the zombie apocalypse comes, Walmarts are the number one choice of destination for fleeing American citizens. They sell everything from guns to massive jars of pickles. Walmart employs 2.3 million people to run its vast enterprise. It’s America’s biggest retailer and is taking an awesome chunk of the online pie too with over 10million items listed for sale on Walmart’s website.

But such a big fish attracts a lot of scumbag scavengers. We’re not talking about a few people putting avocados through the self-service checkout as carrots here. Walmart loses a startling 1% of its revenue each year to ‘shrinkage’ which is loss or theft. Let’s put that into numbers. Walmart rakes in $300 billion every year, but lose $3 billion to thieves or poor stock management. Thus we get to our story whereby a Walmart employee has gotten the wrong end of the stick. In a classic case of ‘Big Hat, No Cattle’ The employee who is wearing a maroon t-shirt, and backwards baseball cap has been positioned behind the checkouts to check customer receipts and catch thieves. The position is more of a deterrent than a ‘cop’ position. Firstly, many would like to see the employee take a little bit of pride in his appearance. You’re at work, for f*ck’s sake mate, show some pride. Secondly, he disgraces himself and his employer by wrongfully accusing a shopper of pilfering a $15 kid’s toy that she has in fact paid for.

What he didn’t realise is that the toy was on sale for $7 and when he ran his eyes down the receipt, he failed to see the adjustment. His manner was pretty average, dragging the woman to his office to straighten things out. After closer inspection, he realised that the toy had in fact been paid for, but the damage was already done and as is often the case these days, his blunder had been recorded for the world to see. Reddit users were quick to jump to the shopper’s defence say that the employee belittled her. It seems like a classic case of two belligerent heads butting here.