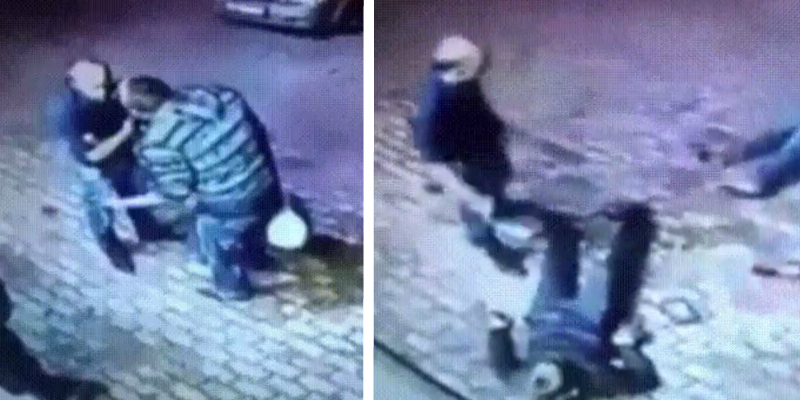 If there’s something we have all been guilty of at one time or another, it is making a bloody nuisance of ourselves when we have had a night on the cans. Whether it is pushing our mates through hedges or singing some Cold Chisel at full voice in the middle of the street, alcohol has a tendency to bring out the awesome in all of us in one way or another. But in the clip below we see some justice dealt out to some lads who are obviously a bit overserved and decide to lay into a nice old man (this is supposedly the story, see what ya think though, maybe the old man was trying to mug them!).

Well, let’s not pigeon-hole the old geezer too quickly because as you will discover, he is far from a meek and mild old man. We open with one of the big bastards, plastic bag of beers in hand having a go that the older bloke outside a 7eleven. He’s popped up the street for a like night Slurpee and run into some louts. But he stands there nice and calmly, as the fella in the striped hoodie is clearly having a go at him. Then just as he’s had enough, Whooshka, he gives the guy a clout, sending his reeling backwards. In comes one of the other louts and, f*ck me dead if he hasn’t landed a left hook straight out of the Barry Hall toolbag. That bloke hits the deck like a bag of oranges rolling off the kitchen bench. Oh look, the first bloke is back on his feet and has put his beer down. He takes a swing at the old bloke who dodges it like Christopher Skase did the ATO. He follows it up with a big right, that knocks this bloke well out too! Not a bad effort, two from two! All from a bloke who doesn’t look like much on first glance. Turns out he is believed to be a boxing coach which really figures. It really goes to show, you never know what the old dog’s got hiding in the kennel.

Check out the quality action below!

While you’re at it, ya should also have a bo peep at this review on TanaCon.