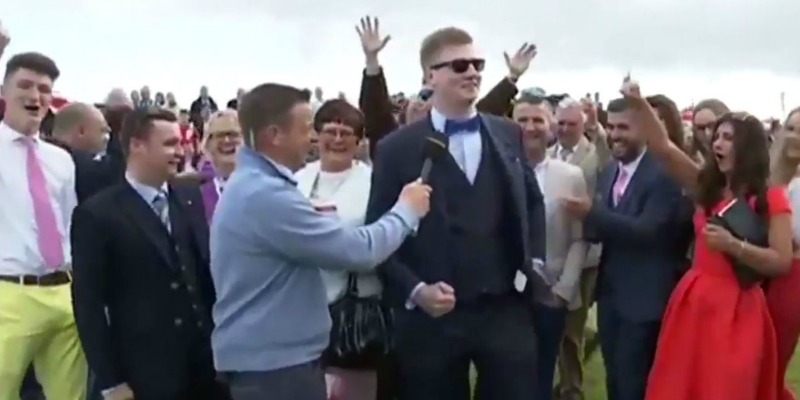 There’s nothing like a day at the races to get dressed up in some swish duds, get the juices flowing, and lay out some of your hard-earned cash. The Irish racing circuit is one of the most-followed in the world and this week the Galway race meet was held at Ballybrit Racetrack. It’s a great day of horse racing with loud personalities taking centre-stage alongside the racing itself. There are few louder personalities than Limerick lad, Josh Sheahan. He is part-owner of the 9-year-old bay gelding, ‘Top of the Town’. He made a name for himself when interviewed by a roving journalist at the races last month.

The 25-year-old said that his supporters ‘would wreck the shop’ at the Limerick Races if Top Of The Town got up in the Michael English Country Music Night 27th July Chase. The thick Irish accent can be hard to follow at times, but if you’ve seen your fair share of Conor McGregor videos, you should be nicely prepared.

This time, sporting a snazzy charcoal bag of fruit and a bow tie, Josh promoted his horse, which was a rank outsider, in classic Irish fashion. Through a thick, slurring accent, Sheahan said: “If this horse wins we ain’t never going to see the likes of it again!” At 20-1 odds, Josh Sheahan told the reporter that he’d “Been praying all week” and “slept with the horse last night for two hours!” He also had been counselling the horse by rubbing his belly and talking to him.

“If the horse wins today, this place is going to be wrecked!” Josh pleaded with fans back home in Limerick to get down on their knees and pray that the horse gets home. Surrounded by 64 friends and family that supported the horse, Sheahan noted that he needs the money as he revealed an anecdote:

The Horse finished 4th last, in 15th place in the Guinness Galway Blazers Handicap Chase. Despite the poor showing, the group at the track were certainly giving it a fair crack!