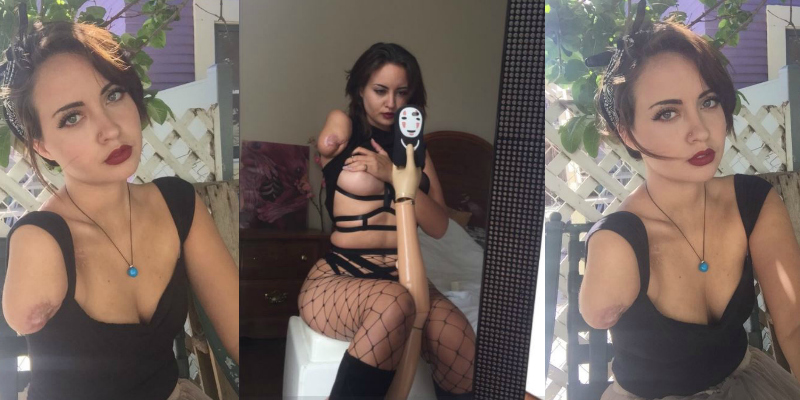 Amputee Woman Has The Best Tinder Profile Ever, And Everyone Wants To Swipe Right

She may not be able to drive a manual or play the piano so well, but this woman can sure grab the bull by the horns when it comes to dating! The gorgeous Lauren from San Diego may be missing her left arm, but lacks little in the personality department!

Having lost her arm in 2016, Lauren turns what many would consider an ailment into a serious attribute as her Tinder account is one of the best we’ve come across.

And her 35 thousand Twitter followers agree that she’s pretty bloody awesome. Her account boasts some seriously hot snaps of her over the past year. This is how to live life if you’re an amputee!

getting married in this pic.twitter.com/11Fl32poB2

I can already tell she has the best personality by her job title pic.twitter.com/uyK7DJCN0M

The 21-year-old self-proclaimed “arms dealer” loves to be the butt of her own jokes as she has scared little kids when they approached her whilst cooling off in the ocean by telling them a shark bit her arm off! We’re sure there’s been plenty more fun too. She also has posted photos of her with an amputee dog which is a little bit cute.

so i found my dog twin named thor pic.twitter.com/tGP6MkkL2g

Lauren has also been known to take things to the next level. In May, she posted this Snapchat of a face drawn onto her nub smoking a cigarette. Some of her followers have referred to her as the “Queen of Amputated Arms”

At just 21, with this kind of personality and the looks to match, it’s amazing that she’s single! We’re pretty sure she’s got her pick of the guy/girl market. One things, for sure, we’d be cracking out the “Super-Like” for this stunner! We should be so lucky.