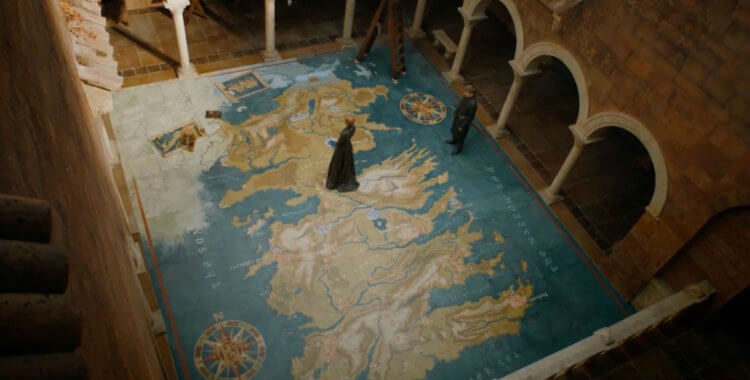 Someone Has Spotted This Incredible Hidden Game of Thrones Message

The hit show Game of Thrones keeps fans guessing with a plot line more twisty and turny than a game of Snake. Season 7 of the epic series has now dropped and fan theorists have been quick to get to work, nerding their way through the books to drawn correlations and prophecies about the show’s progression.

One incredibly strong theory has arisen about the demise of one of the show’s best and most despised carries Cersei Lannister. It arose with the below image, taken from a scene in Kings Landing showing Cersei and Jaime standing on a giant floor map of Westeros commissioned by Cersei.

To get to the crux of the theory, we need to go back to a flashback in season 5 to a meeting between Cersei, her childhood friend Melara and Maggy the Frog a sexy crone who lives in a hovel in the woods. After getting her to draw blood with a rusty tetanus blade and sucking blood from young Cersei’s finger, in the show Froggy predicts that Cersei will wed a King, not a Prince and that someone younger and more beautiful will cast her down and take all she holds dear. She also says that Cersei’s three blonde children will die before her which has of course occurred. The books reveal far more in the scene. Melara asks if she will marry Jaime. To which she says, no, you’re actually going to die. Jealous, brother-loving Cersei pushes Melara down a well where she drowns that night.

The other thing Maggie reveals is this:

“And when your tears have drowned you, the valonqar shall wrap his hands about your pale white throat and choke the life from you.

For those of you, not fluent in High-Valyrian, valonqar translates to ‘little brother’. This is why Cersei hates Tyrion so much – she thinks he’s going to kill him, just like she believes he knocked off Joffrey and her Father. But fans have pointed out that Cersei has two younger brothers.

The other is Jaime. And their strategic positioning on the map of Westeros is telling. Cersei stands in a region called ‘The Neck’ and Jaime stands at ‘The Fingers’.