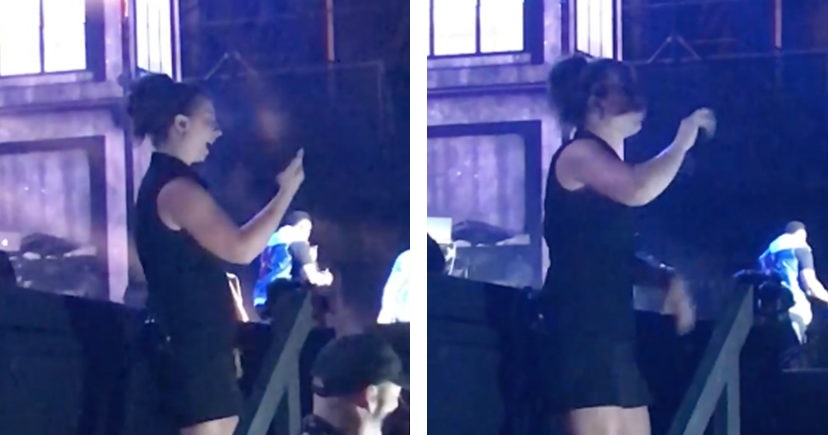 At first thought, you don’t really consider that hearing-impaired blokes and sheilas rock up to big music events. But why the hell not? A lot of partially deaf folks can still pick up the idea of the song particularly if they knew it before they lost their hearing. Footage has emerged from an Eminem concert this week when an American Sign Language (ASL) specialist stole the show from in front of a full house at the Firefly Music Festival.

Her name is Holly Maniatty and her fast fingerwork has become an internet sensation, exploding on Reddit overnight. The bloody talented star lined up on the front of the stage and cut sick as Slim Shady showcased his equally agile tongue work. Just watch how Holly starts off nice and easy with the slow stuff, but when the music kicks up a notch, she is more than equal to the task, getting right into it with a solid groove as well. It’s not like Holly is self-taught either! The young lady studied for years Rochester Institute of Technology, honing her craft. Her first gig came about by chance when tour promoters for Marilyn Manson were searching for a sign language expert. Her success at that concert snowballed into being asked to interpret for Snoop Dogg, Wu-Tang Clan and Alicia Keys.

She also had a whack at mainstream success after she along with fellow ASL interpreters had an epic rap battle with Wiz Khalifa. One would think that her dexterity could come in handy in a vast array of life’s pursuits! Millions of units looking her up on Insty. Credit: The Source

When asked by CBC radio if she includes the profanities that are synonymous with urban rhymes, she had this to say:

“..my assumption is that if someone bought a ticket to their show, they identify with it. They want to see him say what he has to say and put out there his experience so as an interpreter, I would never ever take the stance of filtering or censoring an artist because that’s not really that’s not what music is about at all.” In addition to singing, Manietty can also do signs . Source: Twitter

And bloody right! Nothing like an artist with moral integrity. Check out the viral clip below:

The pursuit of love and connection is something that eludes even the best looking of blokes out there. In the age where a digital connection is merely a swipe away, there is far less emphasis on cultivating real-life ...