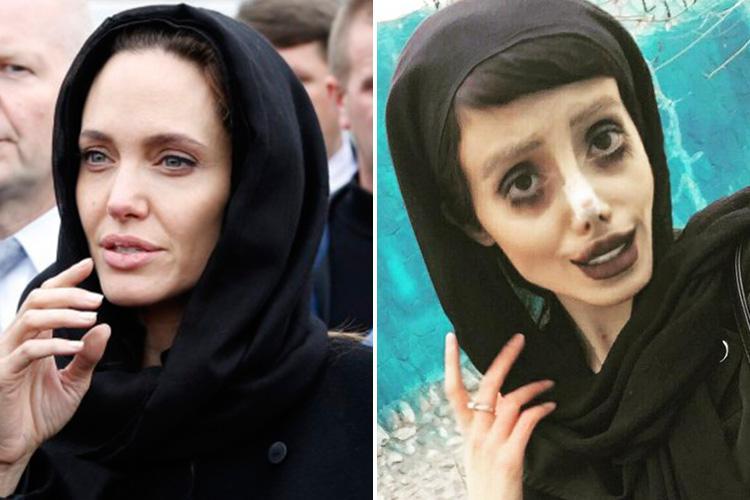 Angelina Jolie has been touted by many media outlets, including Vogue, People, and Vanity Fair, as the world’s most beautiful woman. On Top of this, others like Esquire, FHM, and Empire have named her the sexiest woman alive.

Six of one, half-a-dozen of the other to some, whether you find her sexy or beautiful, we can all marvel at Angelina’s physical gifts and gravitas. Many women would love to add even a little bit of her to themselves to level themselves up!

But some women in the world hold Angelina in higher esteem than others. Let’s take a bizarre example from the Iranian capital of Tehran. A 19-year-old has undergone a number of significant reconstructive facial surgeries in order to mirror her idol, Angelina. Sahar Tabar, has reportedly gone under the knife a staggering 50 times in an attempt to appear more like the Mr & Mrs Smith star and the results are…. Well pretty close. In seeing photos of her before her first surgery, it is clear that some considerable re-modelling would be needed to transform her into her vision.

It’s impossible to get everything right, and it’s clear that in some post-surgery photos there is still considerable swelling that gives her a distorted appearance.

Tabar also used coloured contact lenses to give her those stone blue eyes that we know and love as well as a variety of hair colouring to give it fresh.

A severe weight loss regimen is always necessary in order to truly mimic a Hollywood superstar and Tabar has apparently fallen to a dangerously unhealthy 40kg.

As with any extreme makeover, social media reactions have been a mixed bag. Many have labelled the transformation as looking cartoonish, gaunt and resembling a melting wax sculpture of Jolie.

Her: Doc make me look like an 8 month old corpse.
Doc: I gotchu fam.

The reaction has been taken in stride, by the 19-year old who continues to post updates on her incredible journey.