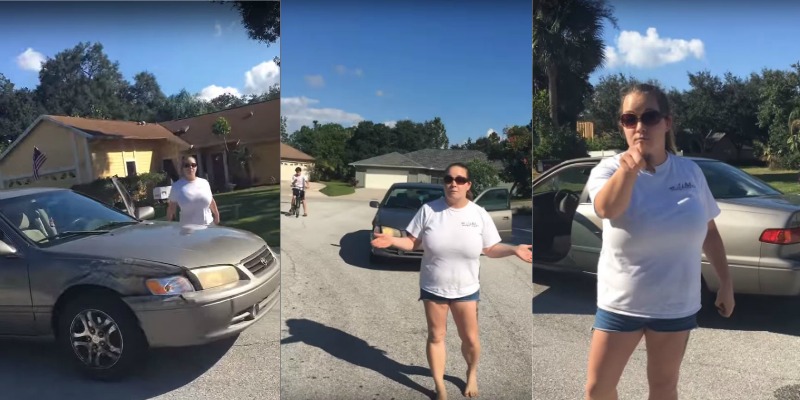 There’s an old adage that says if you argue with an idiot, they’ll bring you down to their level. Such is the premise of the below video that has previously exploded online time and time again.

Now that everyone has a phone in their pocket we all have to be careful in the way we conduct ourselves in public. What may have been resolved with some clear communication and respect by the two parties turned into a furious exchange of words. Basically, a hot tempered sheila started swearing like a sailor at some 14-year-olds and things never got better after that (it’s odd to then see a 14-year-old acting more mature than an adult). Back in my day, if we were messing around in the street and a car came, we’d move to the side and then resume kickin’ the footy or whatever when the car had passed. The person in the car would give zero f*cks that we were muckin’ around on the road.

We should remember here that we don’t have much of an idea of what actually transpired prior to the video, but it seems the kids were on hoverboards on a quiet suburban street when the hot tempered sheila with a sweet leg tatt told ’em off for blocking the road.

This blew up when the kids produced a now-classic i-Generation defence, which is to whip out their phones and record her every move (fair enough if someone seems like they’re gonna get violent towards ya!). The kid talks about his rights as an individual and tells the sheila she’s threatening them with her words and demeanour.

Things further escalate when she reacts to the cameraman’s parting response of “have a nice day” (which I think she believes was said in a smart arse manner). The kids claim she was trying to mow them down. I think one of the other kids spits on her car during the argument. That probably didn’t help the main fella in de-escalating this sh*t. They respond by filming her license plate and they’re positive they have caught her in the wrong. Yeah nah yeah, there is no issue with filming an unfolding event as evidence if it is kept private and used to plead a case. But ya do have to be careful chucking it online, I’m sure there are examples of folks being tracked down and harassed for filming people. Overall, everyone just needs to calm down, especially hot tempered sheila with the sweet leg tatt. It’s not a situation that was worth bloody escalating this much. Stop sweating over the small things and move on!