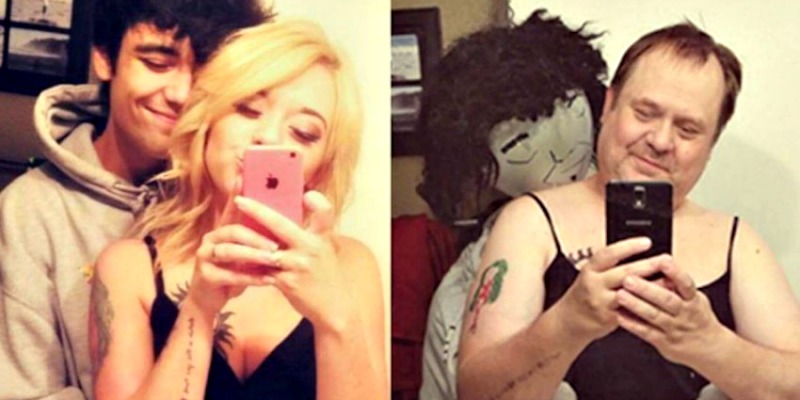 As young adults, we generally keep our parents away from our social media pages.

There are some things which we prefer to protect our parents from that are more accepted by our friends. You are only a tag away from being ousted as the binge-drinking lout that you are, not the angelic son or daughter that your parents believe you to be. So we tend to exercise our right to privacy more vigorously against our folks!

Many parents find it hard to compete for their Millennial children’s time, what with Facebook, Instagram, hook up apps and self-gratification media publication hubs already engaging so much attention. Enter the ultimate mature-age troll, Chris Burr Martin. He is the cool dad we all wish we had. He has found a tactic to not only engage with his daughter, Cassie but enrich her social life.

How does he do it? He re-creates her selfies! Normally a child would distance themselves from a cross-dressing relative such as creepy Aunty Keith. But ‘Father of the Decade’ nominee, Chris recreates his daughter’s poses so artfully and hilariously that Cassie has no choice to embrace his left-field form of love. His account has 150K followers. However, as a father can only love a daughter, he always credits her with a tag. This has seen Cassie’s Instagram fan base skyrocket to over 75K as she re-posts her dad’s hilarious depictions. Cassie and Chris are looking forward to an appearance on TV chat show ‘Ellen’ in the coming weeks. The publicity of Chris’ pictures has prompted countless imitations, some of which are absolutely priceless. Who knew that getting dolled up and tilting your head provocatively could be such an effective tool to connecting with your daughters? Blokes all over the world are now ‘learning their angles’ causing their wives to shake their heads in dismay.