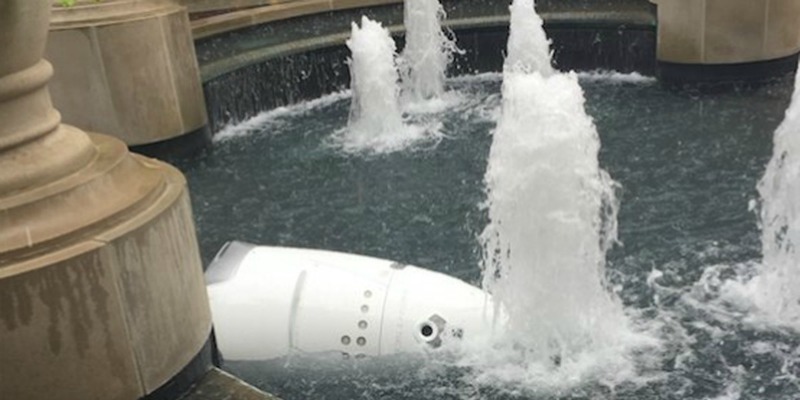 The security industry is one area that has made some huge leaps and bounds in terms of security advancement. One of these is a security robot developed by Knightspot. It’s kind of like an R2D2-style patrol unit that boasts 360 degree camera views and the ability to scan the area for abnormal activity.

It has been developed to have ‘the gift of intelligence’. This means that security staff are reprieved of some of their most menial and boring work. Costing just $7 per hour to hire, on the surface, this seems like a win win. But for this robot on patrol in Georgetown, Washington D.C, the night started poorly and ended worse. After a long night of patrolling an empty office building, the security robot lost its bearings and careened into a fountain in a courtyard (or was it pushed? Roll conspiracy music).

There it stayed til morning when the building’s management could come to find a solution for removing the lifeless shell. Video footage from the robot’s last moments has not been released to the media who are speculating about the emergence of robot suicide. Although others claim it was a mere navigation malfunction. Or was it a murder? Did the little fella see too much? This isn’t the first time the robots have made the news. An altercation with a piss-head in California saw one of these robots assaulted and flipped over onto its side. Helpless like a beetle on its back, the only thing the robot could do was call for help. This it did, with alarms sounding causing the offender to leg it. The police were also notified leading to the man being arrested.