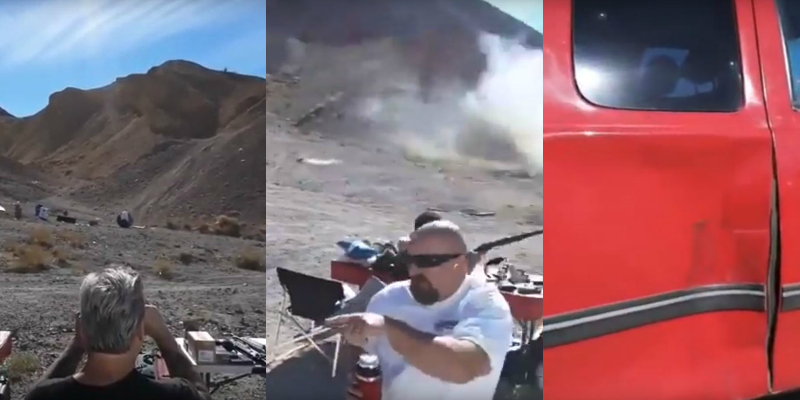 What better way to spend a baking hot afternoon than to load up your gun collection into the back of your truck (ute) and drive out to the desert for a bit of blokey fun on the cans! If you’ve got f*ck all to do, why not leave the missus and kids at home and head off with the boys to the middle of Woop Woop and have some target practice with your high-powered rifles.
It’s all fun and games until someone nearly gets killed, but freedom is a double-edged sword.

That’s the premise of the below video which shows a bunch of buddies in the states who have set up a makeshift target range in the arid surrounds for a nice day in the sun. Complete with a trailer, trestle tables to keep their arsenal pointed down-range and the makings of a barbecue, the boys are set for a big session. That’s until someone, presumably named Cletus, suggested that just plain old targets are just not exciting enough when hit by a high-powered round. After a group consultation, it was decided that they’d pack one of the targets with explosives just to see what happened.

After standing back a few feet, just in case, one of the men fires his rifle from his seat (he doesn’t bother to stand) setting off an almighty boom from the target. Barely a second later, a tyre flies directly at the group, just missing them and slams into one of the trucks behind them. They don’t seem overly fazed by their brush with death, as they laugh and joke full of nervous energy. The reckless act has gained the usual mixed response from those on either side of the gun ownership debate. Taulce1 took time away from his afternoon TV to post the below which was indirectly rebuked poetically by SunnyZ.

Look at all the pussies in here crying about how they can’t believe this is legal and gun are bad. Blah blah blah. I bet you’d really cry if I tried to take away your freedoms. Cowboy the fuck up. This is America. -Taulce1

You know you’re a redneck when your gun calibre is higher than your IQ. -SunnyZ Check out the video below and marvel at Darwinism in action.