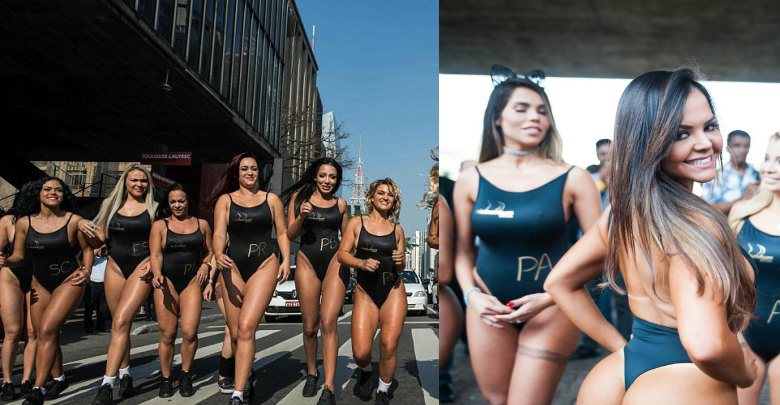 Brazil is a country of sandy beaches, lush jungle, a great soccer team and a lot of top-notch rear-end. Highly celebrated in the local culture, Brazilian women have been cultivating and flaunting their genetic gifts in skimpy swimwear for generations, and no one is complaining. It’s a celebration of our bodies that come in all shapes and sizes. Some are marvellously round, others are disproportionately large and seem to defy the laws of physics! The annual celebration of the derriere known as ‘Miss Bum Bum’ is being staged in Sao Paulo until November. As the thousands of entrants are whittled down, the final 27 have formed a parade through the streets of the capital. A troop of very seedy paparazzi and a motorcade of enthralled motorists tailed the women as they strutted and danced their way joyfully and provocatively down the middle of the road. The contestants then formed an orderly line posing for photographs in front of a packed press gallery who jostled for the best angles.

The competition focuses on equality and is open to all females regardless of race, colour creed or disability. This was embodied by finalist Rubia Machado who is an amputee. This hasn’t slowed her down as she is sporting one of the best behinds in the land! Playboy model Jenny Summers became the first non-Brazilian to make the final few this year. With over 10 million votes cast last year, the competition is going from strength to strength. The Rules are strict. Whilst size is an important contributor, shape, form and gravitas are all taken into account. Gone are the controversial microkinis that have adorned the contestants in the past. The competition is reverting to a more modest celebration of the exquisite beauty encapsulated by the rear end.

Contestants are also not allowed to have had plastic surgery to enhance their natural assets and the competition has imposed a maximum diameter of 107 cm to be eligible.

The final 27 will become 15 before the Grand Final is held in Sao Paulo in November.

Stay Tuned, we are!