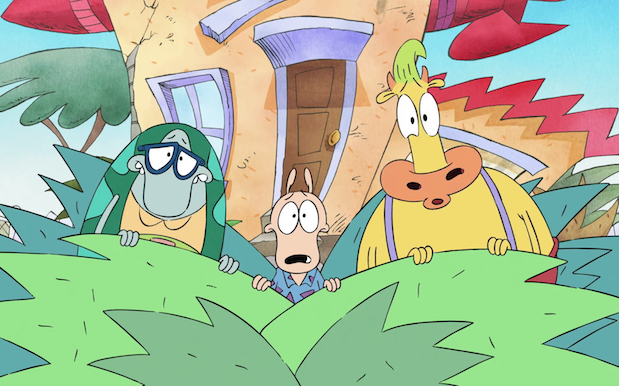 If we grew up in the 90s and were lucky enough to have access to some of the greatest cartoons ever made, back before Netflix, YouTube and 800 cable TV channels. One carton that had one of the biggest followings was comedy juggernaut, Rocko’s Modern Life. It was a show about a wallaby that relocated from Australia to the states. He was allowed to freely and unmolested as Trump wasn’t in power at the time.

The show ran for 4 glorious seasons and was known for its outstanding double-entendres the show has been described as raunchy for adults whilst maintaining playful innocence for its child audience. To be honest some of it is downright filthy! After 52 episodes, many of the show’s writers and production team began Spongebob Squarepants. The pedigree is amazing. The show returns in 2018 with a one-hour tele movie going by the name ‘Rocko’s Modern Life: Static Cling’. A sneak peek which was unveiled at Comic Con shows Rocko exploring a more modern world than what he’s used to. It also provides a bit of a wake-up call for how we behave as humans in 2017.

The clip pokes fun at our reliance on technology and the hype that surrounds new tech releases. It shows the “O-Phone 8” being succeeded by new models within a few seconds and the old models becoming obsolete. The fictional energy drink “Slamo” is a tip to the high sugar, taurine and caffeine levels in some of our popular beverages. The logo for Slamo is a radioactive warning sign and consumers promptly develop mutant features after ingesting the drink.

It shows how bricks and mortar shops are being replaced by machines.The food truck trend is brought up mocking the latest hybrid foods such as “Pizza Taco” and taco flavoured tacos in another taco. It really is a wake-up call for a number of food wankers out there! Somewhat scarily, technology is showcased as a medium for the invasion of privacy. The clip depicts people using computers to scam people out of their cash.

Rocko Closes the video by saying, “The 21st century is a very dangerous Century”