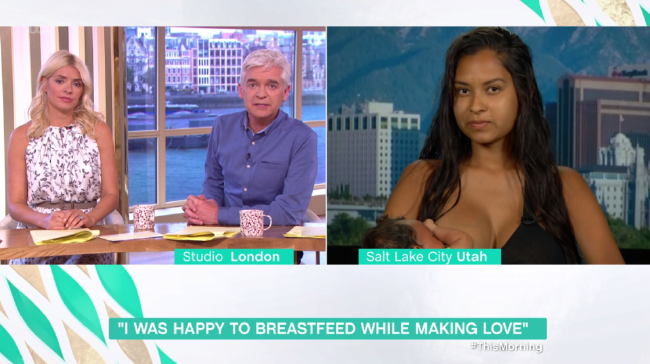 Everyone’s favourite YouTube breastfeeding advocate Tasha Maile has again created waves on social media. Appearing on the UK TV programme ‘This Morning’ on ITV, Tasha defended her decision to simultaneously breastfeed whilst engaging in sexual intercourse. Since the initial video, Tasha has clarified in another monologue that her child was attached to her 24/7 and that he was asleep, using her as a dummy, or pacifier while the couple got it on. A lot of viewers are still trying to get their heads around the logistics of having sex ‘from behind’ while not disturbing a sleeping baby latched to a nipple. Appearing via video-link from Salt Lake City, Tasha pushed the line that if it feels right then it’s fine to have sex whilst an infant suckles away. Hosts of the programme, Holly Willoughby and Phil Schofield were quite taken aback by her beliefs with disbelief adorning Willoughby’s face throughout the interview.

Tasha confirmed that she had not had sex in front of her five-year-old son, whom she still breastfeeds. Host, Holly asked if she has sex with her husband while her three-month-old baby is awake. She said: “Even if the baby is awake and off to side … If the baby is OK, they’re not judging you.” A mother of three herself, Willoughby is noticeably uncomfortable with the set of responses that Tasha gives.

When she was asked to clarify her position, Tasha continued, somewhat illogically, “Is it okay to kill somebody someone in front of your children?” We aren’t too sure where she was going with this statement, and Phil Schofield was quick to defuse the interview stating the child services would be fairly quick to respond if that situation arose. Throughout the interview, Tasha appeared as she does in many of her videos, with a child suckling from her breast. Many viewers have branded her as ‘attention seeking’ and that she should not be given air time.

Viewers at home were shocked by interview, largely condemning involving a child in a sex act via Twitter.

Did she really just compare having sex infront of your children to killing someone infront of them? How deluded is she?! #thismorning

"there's not a law against sharing your life". I'm sure there's one about performing sex acts in front of your kids though! ? #ThisMorning

WATCH THE INTERVIEW ON THE PLAYER BELOW: