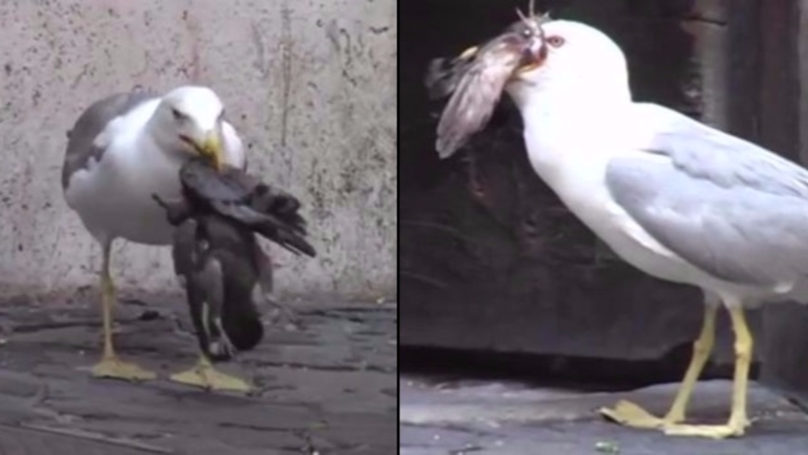 Seagulls: the white, dime-a-dozen, arrogant, prick birds ruin many a beachside experience as they crowd around fish ‘n’ chip diners hoping for a morsel to be tossed their way. Sometimes they edge closer and closer as they become more confident. Then there are the sneaky bastard ones that stand on one leg and tuck the other one up so you feel sorry for it and give up ya grub.

Aussie seagulls are generally a variety called the “Silver Gull”. They have a greyish white appearance along with a red beak and pins. They’re scavengers by nature and will feed on worms, dying or dead animals and insects as well as discarded food scraps. According to the experts on Wikipedia “The silver gull has a sharp voice consisting of a variety of calls. The most common call is a harsh, high pitched ‘kwarwh’”. Yep… But Aussie seagulls have nothing on Italian seagulls. Just like in salami making, playing soccer or fountain loitering, the Italians seem to have us covered in the badass seagull department as well. A video has come up what looks like a “Great Black-Backed Gull” taking a dying pigeon to task.

The largest member of the gull family, this brute has found an ailing pigeon on the street and finished him off by pecking him to death with his razor sharp beak. But then he begins to devour the poor dead bird! Like a snake taking down a bison, he unhinges his jaw and after a bit of shaking, he engulfs the whole thing in one go! He’s certainly not worried about chewing before he swallows! Nature is terrifying at times and this is no exception. Bystanders were completely shocked at the bird’s throat acrobatics and lack of gag reflex. Next time you are thinking of throwing a seagull your entire foot long subway sandwich, don’t worry; these guys can take care of themselves!

Check out the video below! Be warned. It is fascinating, but very NASTY.