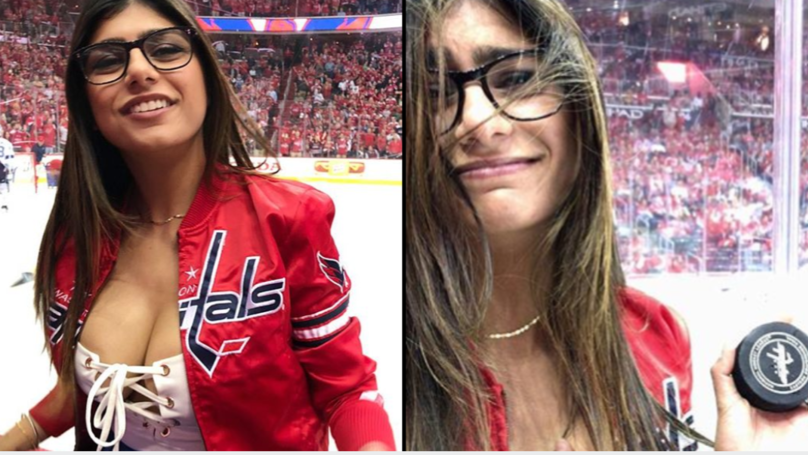 Khalifa was standing behind the glass at a Washington Capitals and Tampa Bay Lightning playoffs match in May when a wild shot at goal missed everything, absolutely everything. The puck was belted so fast but the shot was so wide and high that it launched over the glass. Anyone worried about the puck’s well-being need not worry – it had a soft landing!

You see, the puck has cannoned at 80 miles per hour, straight into one of the most famous boobs in history. Mia’s meat thoroughly absorbed the force as the soft silicone was able to take a lot of the force. The artificially-enhanced meat was enough to ensure a nice cushioned landing pad. And amazingly, Mia herself was pretty much unscathed at copping one right in the tit saying: She’s got guns too Credit: The Big Lead

It smacked into the star hard enough to rupture the implant. Now, it was previously thought that a ruptured titty filler would mean boob juice would erupt from its sack flooding into the body requiring some form of surgical intervention. But Khalifa was quick to set the record straight.

“They’re really heavy, it’s pure rubber, they go at about 80 mph. My left breast is slightly deflated now, and I will be getting it fixed next year.”

So, no discernible difference at the moment, which is good because she won’t be going around looking like the plastic surgeon never came back from his lunch break.

As young people will all want to, she posted the joyous news of the incident on Instagram.

She’s also pretty stoked at getting to keep the puck!

“I got to take it home, it was the single greatest souvenir any hockey fan can get: a game-used puck that comes at you and hits you.