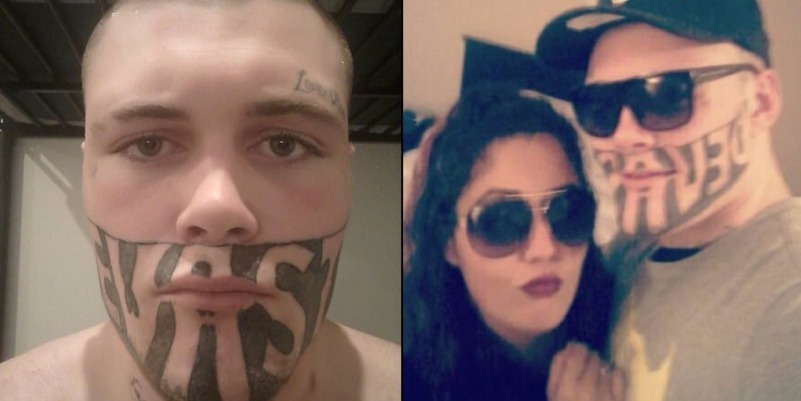 Man With DEVAST8 Face Tattoo Is Having Trouble Finding An Employer

We only get one face and whilst some look like a bucket of assholes, rarely are they worth covering up with facial tattoos. There is most definitely a stigma associated with them, in fact in China, facial tattoos were once used to brand criminals as a lifelong warning to others. But to many in the west, facial tattoos hold strong links to gang affiliation which causes many nightclubs to hold door policies that refuse entry to those with facial tattoos, full stop.

Mark Cropp is an interesting man. The New Zealander has found it difficult to find a full-time job after being released from prison. A task made harder due to the fact that he emerged with some pretty bloody prominent facial ink. Mark’s nickname Devast8 is now a permanent ear-to-ear fixture of his face and whilst he holds no allegiance to any gangs, the overbearing stigma is making finding an honest job a difficult task.

Mark obtained the tattoo in prison whilst drunk on home brew. He had been going through a rough patch in prison and knew that even behind bars, people generally stay away from the face tatt guy as he is likely to be a nutcase and shit-deck you through the floor. Perhaps a solid solution to employ whilst in the clink, but Mark’s foresight did not extend to the outside world. Cropp is looking to get his life back on track. Released from prison and currently separated from his daughter, he needs to find work in order to provide a sound living situation for her. However, with his tattoo, Mark is finding it difficult to find an employer to take him on. Facial tattoos are seen as indicative of poor life decisions which are a business liability. Whether this is right or wrong, the stigma is overarching and individuals rarely get a look in.

This reaction led Mark to make a heartfelt plea via Facebook. A selfie accompanied by an account of his predicament was enough to elicit a viral response from the community. Mark is now hopeful of being picked up by an employer sooner than he thought.