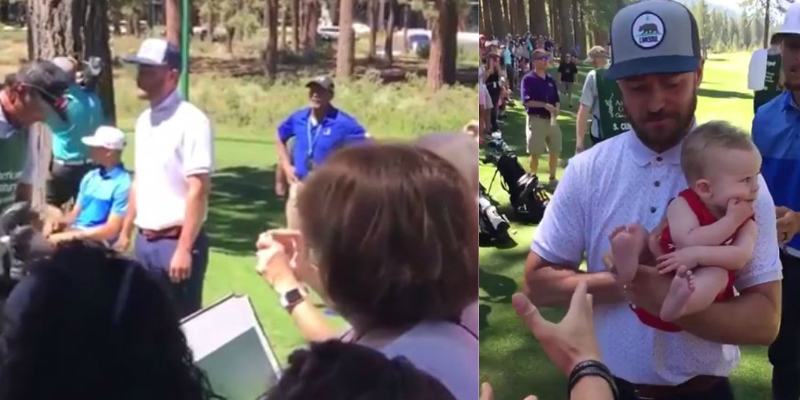 A spectator at a celebrity golf tournament in the United States has fulfilled his ambition of getting a star to hold his baby. The somewhat bizarre goal was fulfilled in front of a packed gallery of onlookers at the 2017 American Century Championship where celebrities compete for a $600,000 purse.

It’s a case of third time lucky for the gentleman who attempts to bait the golfers with his child dressed in red as they walk to the tee. He first attempts to flag down NBA star Stephen Curry who turns a blind eye to the request. The next man to walk past was Tony Romo, however the Dallas Cowboys legend also declined the man’s request.

But the last man to wander to the tee is Justin Timberlake who has always seemed like a bit of a legend. A new dad himself, Justin eventually succumbs to the crowd’s chant and approaches the man with his baby. Mr Timberlake snubs an offered handshake from the man and grabs the kid like a pro. But things take a turn as he holds the baby aloft. He then begins a Zulu-style chant akin to the classic scene from the Lion King. It’s a touching moment which the gallery seems to love. For those who can’t remember the scene from the movie, Simba is lifted up to the epic tune that was ‘The Circle of Life’. Tear jerking stuff, and shit.

Reddit users have been quick to point out how annoying men like him must be to celebrities. They are constantly being hassled for pictures, handshakes and occasionally come across the odd hysterical crazy fan. People have also made note of the significant social pressure put on the former N*Sync star by the crowd chanting at him to hold the baby. Some keen golfers turn up their noses at the premise of bringing a baby to a golf tournament. A crowded environment where silence is required isn’t really an ideal setting to bring an unpredictable baby. However, this little dude doesn’t make a peep and seems to love the experience.