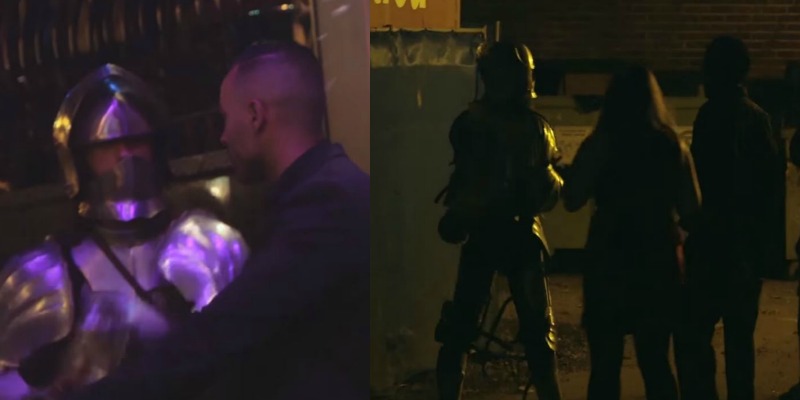 Man Dresses Up as a Knight and Hilariously Trolls Nightclub Bouncers

A comedian from Canada has upped the ante by getting kitted out in a full suit of shining armour for a slap-up medieval romp on the town.

The video shot in Montreal features the fellow attempting to gain entry into several night clubs (or “Knight Clubs”) as he puts it, in the downtown area. Shot for Playboy, the comedian encounters several bouncers on the door of various clubs. Some see the humour in it, some believe it’s a waste of time and tell him to move on. Throughout the stunt, his responses are hilarious!

What starts off with pretty innocent puns on the homophonic nature of the words ‘night’ and ‘knight’, quickly ascends in comedic value as the man confronts more people on his route. He attempts to gain access to various clubs under hilarious guises that may ‘be on the list’. Such include Sir Dance-alot and Sir-Cumference. When this fails he tries a different route saying he has a ‘round table’ booked. At one point, his foray into the modern world takes him down a back alley where he sees a group of men. He inquires with them seeking to procure “Gandalf the Green, if you know what I mean!”. He then poses for pictures with various partygoers in the area.

The knight is also a gentleman as he displays chivalry from a bygone era. He halts traffic for a group of ladies before attempting to carry one in his arms who exclaims that she isn’t wearing underwear. He assures her that he isn’t either!

The knight provided another element of light heartedness to a fun night on the town as he eventually found a joint that would allow him entry.