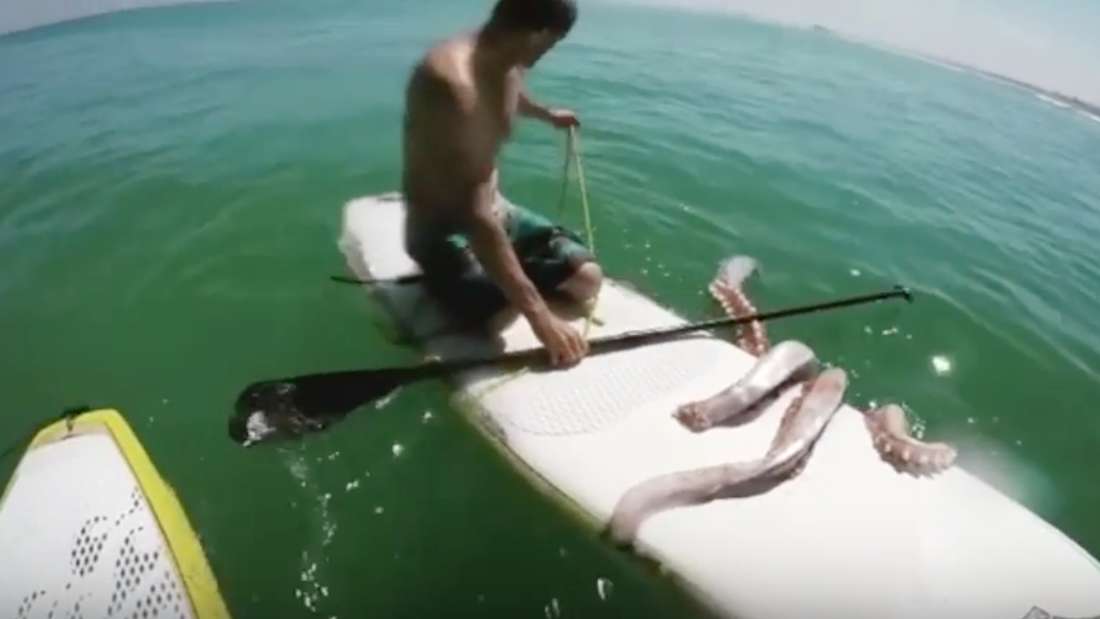 It’s a calm and sunny day as two paddle boarders enjoy the pristine conditions off the coast of South Africa’s Western Cape. A Giant Squid latches onto 30 year old, James Taylor’s paddle-board, before he dives to the safety of the water.

Mr Taylor had spotted the clearly injured cephalopod floating lifelessly on its side in the water and was attempting to lasso and bring it into shore when the squid’s arms began to wrap around the board. Not knowing if he was next, the video shows James frantically dive away. Whilst Giant Squid don’t generally prey on humans, the thought of being wrapped up and drawn underwater by their powerful arms is bloody terrifying! But smaller squid have been know to hunt in packs.

It is rare that elusive Giant Squid, (which can grow up to 13m long) wash up on the shores of South Africa. Taylor dissected, photographed and videoed the creature with a crowd of people. The images were then sent to a local marine professor of 15 years. He also attempted to contact the local aquarium, to no avail. Social media critics have sprung into action with animal rights supporters voicing their deep concern for the squid’s wellbeing. Squid are known for their ability to regrow their arms and many believe Mr Taylor should have left the squid alone and allow it to live out its days in the shark infested waters of the South Atlantic. Others praise the compassionate nature of putting the ailing squid out of its misery.

Don’t know about you, but we think the ocean is seedy enough without giant squid coming back from the dead! See the video below if you don’t want to sleep tonight!