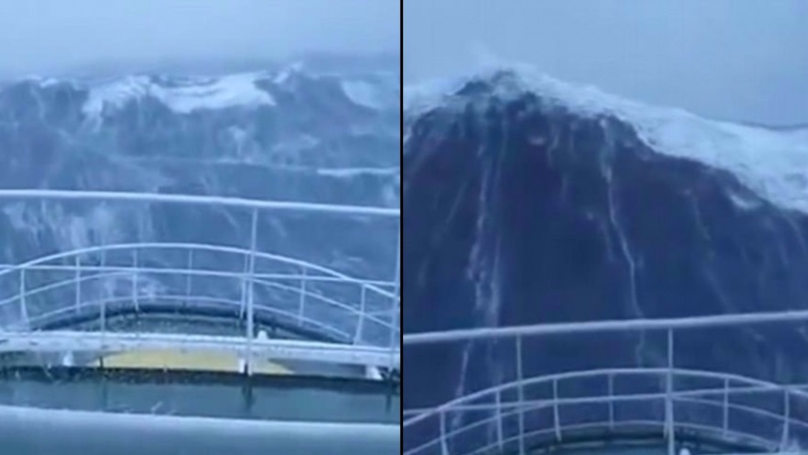 For any of us that have seen ‘The Perfect Storm’, ‘Deadliest Catch’ or ‘Cast Away’ understand the ferocity of the ocean. There isn’t much on earth that can compete with its power and fury once the weather takes a turn. You only have to flick through a coffee table book of disastrous shipwrecks to know that if you get caught in bad weather, you’re going to get f*cked. A video has emerged with footage taken from the bridge of a large ship as it battles some monster waves in the north sea. It’s unclear whether this is a cruise ship or not – the white railings suggest it could be. But we would hate to be on sitting down to a nice buffet lunch and have to compete with that kind of ship movement! The clip climaxes with an epic wave strike with a thirty-metre high wall of water! The footage is as mesmerising as it is terrifying and we imagine ourselves being tossed around like a cork at the mercy of the waves. The ship pitches and rolls, amazingly staying upright and afloat. Many of the comments from the expert YouTube community suggest that if she were a smaller, lighter vessel, she would not have stood up to the waves as well as she did. We can only imagine what it was like in the days of wooden tall ships that would have been pummelled and smashed by waves this size. It’s probably no wonder that sailors were superstitious and religious! Whilst I’d think most of the passengers and crew would be battening down the hatches and reaching for a bible as they prepared for the worst, one of the deck officers on the ship provides amazing audio accompaniment to the wave strike. He’s up there like Lieutenant Dan from ‘Forrest Gump’ saying “Come the f*ck at me!”. Laughing and proclaiming “That’s fecking awesome” in a thick Scottish accent, the video is worth the watch just to hear his guttural reaction

Watch the video below.