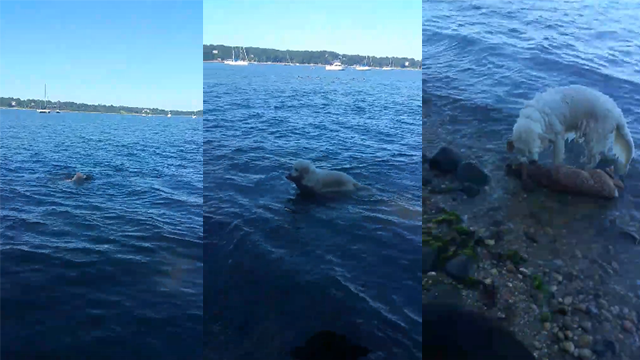 Hero Dog Swims Out And Rescues Deer From Drowning In Harbor

Dogs have been known to do some amazing stuff throughout history. There was the fluffy white one that posed as a guide dog to get a bloke into a pub on that Tooheys New ad. And we all remember Shadow from the classic movie ‘Homeward Bound’. As far as they go, this next story is up there!

Reaffirming many of our love for blondes, a Golden Retriever is quickly gaining fame after a video showing the dog rescuing a flailing deer fawn from a harbour has gone viral this week. Storm spotted the deer that had gotten out of its depth in the Long Island, New York harbour and wasted no time swinging into action. The poor fawn was in pretty deep poop and was in serious danger of succumbing to a watery grave. But after a quick doggie paddle out, the retriever grabbed its four legged by the scruff of the neck and dragged it back to shore using perfect survival stroke technique. There is a point in the footage where the owner is unsure if Storm has gone out to try to save Bambi, or just to tuck into some nice gamey meat – but Storm proves to be a gentle-natured dog.

Golden Retrievers get their name from both their colour and their use through history as gun dogs. Shooting parties would use these dogs to collect birds that they had shot down. The dogs had a gentle manner in the way they handled the animals and they were able to bring birds back to the gunmen intact and undamaged.

Even after the fawn was back on dry land, Storm’s job wasn’t complete. Being scared and shaken by the ordeal, Storm appears to nuzzle his nose into the deer’s neck and then stays by the deer’s side to ensure it regains composure. Storm’s owner provides proud commentary throughout the video. Storm truly deserves many a reward biscuit and displays why retrievers have such a good reputation as gentle-mannered and caring dogs.