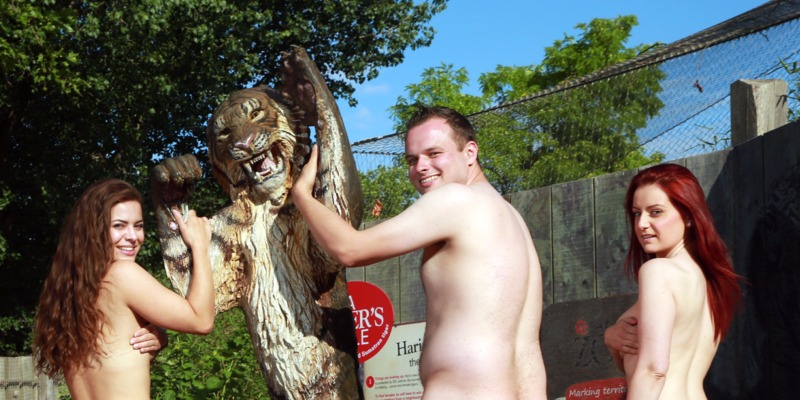 Explicit Content: Zookeepers At London Zoo Bare All for Charity

There’s nothing like getting in the buff and letting the fruit hang out. Adam and Eve knew it until the bloody serpent ruined it, Mia Khalifa knew it, as does creepy Uncle Steve. We love a streaker at a sporting event, but getting in the nuddy in public gets you turkey-slapped with a fine exceeding 5 grand and also served with a conviction notice from the cops for public nudity!

However, the London Zoo is saying Bollocks to that as they launch their 5th annual ‘Streak For Tigers’ run through the world famous menagerie. The one-of-a-kind event sets out to raise £40,000 for tiger conservation efforts at the Zoo and raise awareness of the plight of tigers in the wild. Unfortunately, these magnificent creatures are a hot target for poachers with their skins still made into rugs despite animal-friendly alternatives being abundantly available. Chinese medicine has, since ancient times, held Tiger schlong as a powerful aphrodisiac. The aphrodisiac can take the form of a powder (made from the dehydrated penis) or chopped up and added to a soup. Damn!

Back to the charity run. Set to attract some 300 brave individuals, the Streak For Tigers will be held on Thursday 10th August. Previous events have seen patrons body-paint themselves up as tigers and the first 3 years of the event raised £ 165,000 for tiger conservation projects in the wild.

Zookeepers in a bid to attract entrants have stripped off for a practice run, with some staff even going about their daily duties in the buff. The unusual sight sparked interest from this penguin who fled the scene after his sticky beak.

The run will take place after zoo hours at 19:00. The zoo’s website says to secure a place in Streak for Tigers you’ll need to pay a £20 registration fee (£18 for students) and pledge to raise a minimum of £150 (excluding gift aid).