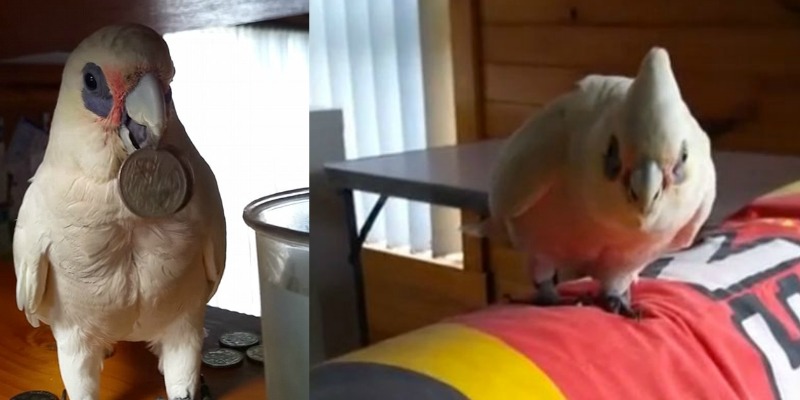 Eric is a naughty boy.

This beautiful white-crested cockatoo has won hearts around the world with his potty mouth and abusive, aggressive nature. He resides in Tasmania and his owners have taught him some very bad habits and swear words which the YouTube community delights in observing. Cockatoos are known for their ability to parrot human speech and other sounds pretty well. Even though Eric has a bit of a raspy voice, his accent is uniquely Occa and he’d be great to have behind you to talk some trash with your mates.

If you feel you’d like your own foul-mouthed feathered friend. A Cockatoo can cost anywhere from $500 – $1500. You’d better be in it for the long haul too, as the birds can live for up to 60 years in captivity. Some species of parrot and macaw can live up to a century. Eric is a self-described ‘f*ckin’ legend’ and goes by the YouTube name, ‘Eric the Legend’. His channel boasts 64 videos with him doing everything from swearing at other ‘Bastard’ birds in the backyard, to throwing his dinner of steamed broccoli on the floor in protest. The plucky cocky has got plenty of spunk and is a hell of an entertaining bird. The below video shows some of Eric’s best work as he play-fights with the family’s Jack Russell. Check out the classic Vegemite Blanket draped over the back of the couch, it doesn’t get much more Aussie than that! That’s a bloody collectible! Gonna be worth trillions soon.

Eric spits at the dog and get elicits a retaliatory response. After being nipped at, Eric responds with some class-A abuse. But it doesn’t just stop there as Eric verbally unloads on his four-legged friend. He’s definitely got a bit of a temper on him!

With just over 26,000 subscribers on YouTube, and millions of views across social media, the legend that is Eric is one entertaining bird, which shows the owners have definitely put some unique parenting skills to work on him!

Check out Eric’s antics in the hilarious clip below!