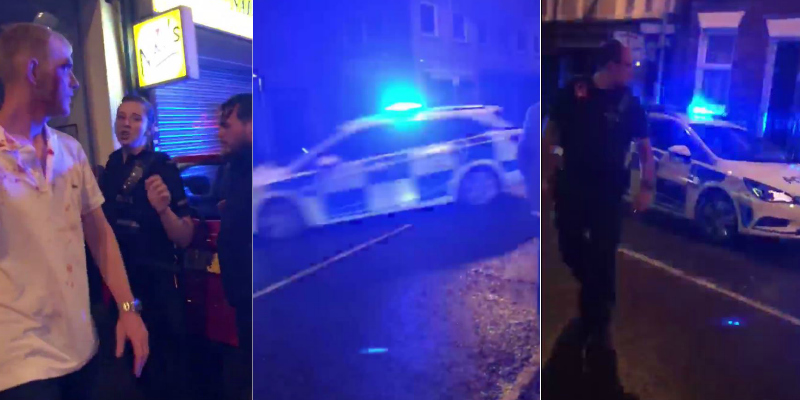 Nights out in the city can sour quickly when you’ve had a skinful! Some lads go on a testosterone-charged attack and others are aggressively defensive. When the two meet the results can be volatile as f*ck.

A late night in Kent has resulted in a scuffle between a few blokes. It’s in Gillingham, a university town, so there’s likely to be a few parties in the Summer period. The footage below opens showing a man in a white shirt which seems to have a bit of claret spilt on it. Two police are already on the scene looking to quell the simmering anger before it boils over. The men are considerably lubricated and at that loud, bravado stage. It’s not lookin’ pretty.

The video then goes up a notch as sirens are heard wailing in the distance. As they rapidly approach, the cameraman turns just in time to capture a cop car performing a very ‘un-police-like’ manoeuvre. Spoilers! The policeman puts the car into a power slide on the wet road, whips around a full 180 degrees, and somehow parks perfectly on the other side of the street. Whilst it’s an impressive undertaking, the driver comes pretty bloody close to those on the drunkards on the pavement who are swaying about. After the car comes to a stop, the two police exit the vehicle and nonchalantly approach the scene with some badass swagger. A bit different from the Cockney PCs on The Bill! The Kent Police have come out, issuing a statement saying “A police patrol vehicle attending the incident skidded on the wet road whilst it was coming to a halt and it was involved in a minor collision with some railings. Folks have said that the minor collision has probably put the wheels out of alignment, requiring a full day of work in the mechanic’s shop to fix it up. This is an extensive cost to the taxpayer ey! Nah, not really. And at least it looked bloody awesome.

The two men were taken into custody overnight and released without charge.