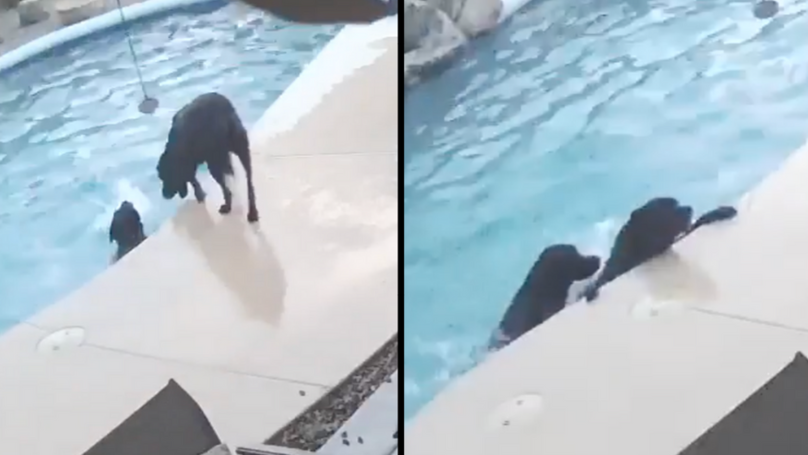 They have man’s best friend for millennia. And I’m not talking about slinky conniving cats! The other four-legged variety of animal that we just love can be dopey pricks at times but are loyal and smart, even compassionate at times. But what many of us didn’t know is that dogs can also show the same care towards their fellow canine mates. As we see below.

It’s a nice summer day in the backyard and a couple of dogs are enjoying a frolic in the sun whilst their masters are out and about. And while one of the dogs loves a splash around in the pool, the other does not seem to have had their swimming lessons and once in the drink is having a bit of trouble getting out. Rather than trying to paddle down the other end, the poor dog is panicking and barks to his mate. “Help me, Doggo!” He yelps and he makes a boiling mess of the pool water. And Doggo responds.

After going over for a bit of a yack and trying to drag the struggling animal out of the water by the neck, the land-based dog takes a plunge into the pool paddling underneath him to give him a step-ladder boost out of the water. He himself jumps out as well, coming to see if his mate is all good. But the bastard dog who has just been rescued from certain death just walks away like nothing has happened. The ungrateful sh*t doesn’t even offer a kiss or a lick, or an arse sniff in gratitude! The hero-dog pursues him, but he has gone for a wander to the other side of the yard, not wanting a bar of it. Disgraceful manners, and we wouldn’t be at all surprised if he thinks twice about risking his life next time to help the clumsy idiot! Our hero dog may not have been recognised by his mate, but we sure as hell raise a glass to the four-legged legend!

Check out the rescue below.