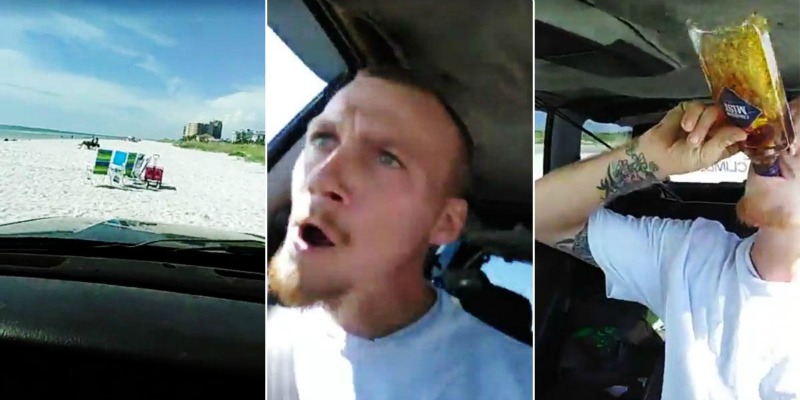 Surely it’s been drummed into us enough as a society that you don’t drink and drive. People who do are branded as supremely irresponsible and hopefully the numbers of drunk drivers on our roads is declining these days.

This bloke in Florida has taken it way too far and filmed himself driving along Clearwater Beach with police hot in pursuit. The Facebook live video showed his drinking from a glass flask of Canadian Mist Whiskey. This stuff must be utter horse-piss with a 1.75-litre bottle costing a measly USD$16.

He added to his vast criminal history being charged with Driving Under the Influence of Alcohol, Driving with a suspended license, reckless driving, fleeing and eluding, hit and run with property damage, felony criminal mischief and threatening a public servant. If it happened in Australia he’d be done for using a mobile device whilst driving too! As if the world isn’t on edge about crazed drivers running people down in public, this bloke narrowly misses terrified beach goers as he runs down beach chairs during the rampage. One mother interviewed after the event said that she had just taken her son out of a play pen before the car whizzed by less than 2 meters away.

Thankfully no one was hurt. Despite Stiles yelling several times that he was going to die that night. Think about how many people could have been sun baking with their headphones in, or asleep, unaware of their surroundings and unable to get out of the way. Even after he was caught by police the ruffian was still being a pest in prison as he broke a toughened glass window with his belt. We should point out that this is not the same R. Stiles that kept us in fits of laughter each week on ‘Who’s Line is it Anyway’! Not only will Stiles hopefully cop a killer hangover, but the full penalty of the law as well.