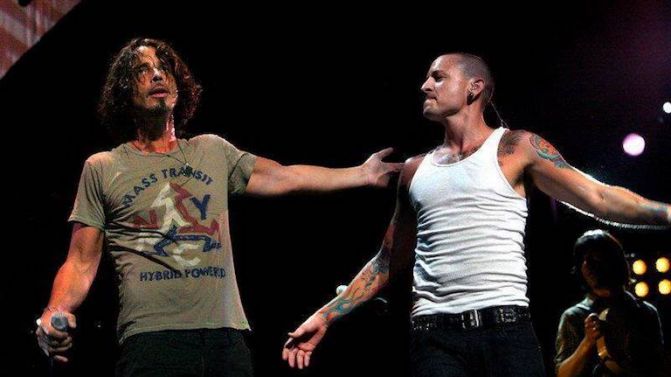 The world has lost two incredible artists and performers in two months. On May 18th, Chis Cornell passed away. He was the lead singer and frontman for both Audioslave and Soundgarden. So many loyal fans around the world will always remember his iconic vocals and his outstanding contribution to modern rock music. He is considered to have had some of the most profound influences on the music industry over his career.

Chris struggled with depression and substance abuse throughout his life despite maintaining his sobriety for some years before his death. However, in May, Cornell was found dead in his dressing room after a Soundgarden concert having hanged himself with an exercise band.

Toxicology reports determined that whilst there were drugs found in his system, they did not directly contribute to his death.

Now, Linkin Park singer, Chester Bennington, has died on what would have been Chris Cornell’s 53rd birthday. The coroner has confirmed that Chester died by hanging. Chris’ passing had understandably affected Chester deeply. After performing at Chris’s funeral, Chester said that he could not imagine the world without Chris. The two performed a memorable rendition of Linkin Park’s hit ‘Crawling’ on tour in 2007 and 2008. There is a video of one of these performances below showing the palpable connection between the two. Their harmonies are perfectly tuned, their voices mix beautifully and their shared emotion with the lyrics is an awesome thing to witness. This serves as a reminder to all of us that depression is not something to be taken lightly. These two great men left behind millions of fans lamenting their loss, trying to understand why it had to be so. Whilst we are taking great strides as men, we need to know that there is nothing ‘unmanly’ or shameful about seeking help, or even just chatting to a mate about what’s going on in your head. It’s a hard thing for many because we’re brought up to get through it ourselves. But the hard thing turns out to be the best thing and it may just save a life or two. When Chris passed, Chester wrote this touching tribute as an open letter.

I dreamt about the Beatles last night. I woke up with Rocky Raccoon playing in my head and a concerned look on my wife’s face. She told me my friend has just passed away. Thoughts of you flooded my mind and I wept. I’m still weeping, with sadness, as well as gratitude for having shared some very special moments with you and your beautiful family. You have inspired me in many ways you could never have known. Your talent was pure and unrivaled. Your voice was joy and pain, anger and forgiveness, love and heartache all wrapped up into one. I suppose that’s what we all are. You helped me understand that. I just watched a video of you singing ‘ A day in the life ‘ by the Beatles and thought of my dream. I’d like to think you were saying goodbye in your own way. I can’t imagine a world without you in it. I pray you find peace in the next life. I send my love to your wife and children, friends and family. Thank you for allowing me to be a part of your life.

With all of my love.

Watch the two performing ‘Crawling’ together on stage: