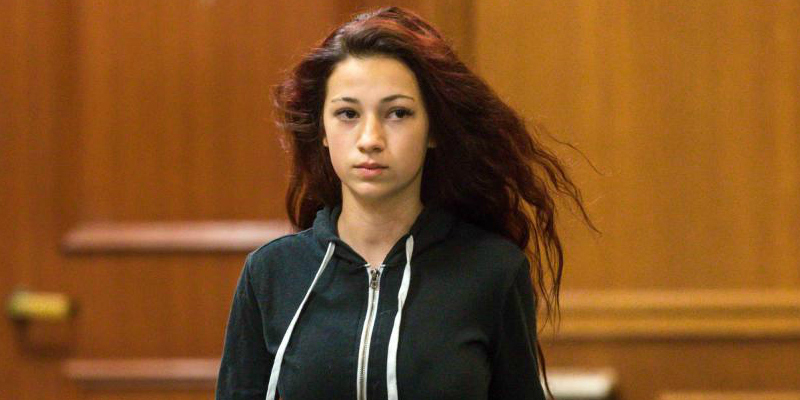 Danielle Bregoli, the human meme is back in the news this morning after the 14-year-old learned her fate after pleading guilty to 2 counts of grand theft, marijuana possession and filing a false police report to try get her mum arrested. Classic. I reckon we’ve all had a crack at trying to frame our folks for dodgy sh*t once or twice in our teen years ey. Ey? Haven’t we? You guys? (Tumbleweed).

Owing to the fact that she entered an early plea to all counts, Danielle will be on her best behaviour for 5 years if she is to escape further penalty. The probationary period will be carried out either in Florida or California where she now resides with her mother who has perpetuated her rise to fame. Danielle and her mother, Barbara (Barbs if she’s ya mate), have a dysfunctional relationship where Barbara struggles to control the brattish and ‘out of control’ behavioural cycles displayed by her daughter. Danielle dropped out of school in the 7th grade and seeks to lead a fame-fuelled life spawned by her catch-phrase “Cash Me Ousside”. Check out her original appearance on Dr. Phil that kicked off what will be remembered as one of the greatest f*cken memes in history:

Side Note: The teen reportedly earns in excess of $10,000 to make celebrity appearances. She has appeared in a “music” video by Kodak Black standing on the bonnet of a Rolls Royce. These reports have prompted her estranged father to file documents to release him from the liability of paying child support to her every month. He claims that if she earns this much already, she should be considered self-sustaining. She has two counts of grand theft from stealing her mum’s purse and car keys. She was also found in a separate incident this year in possession of cannabis. Bit of GTA and weed action ey. Shockingly, in May last year, which predated her appearance on Dr. Phil, Bregoli sprinkled powdered sugar on her bathroom counter before calling 911 and filing a police report that her mum was using heroin. When the cops rocked up, she admitted to lying about the whole thing. I wonder if she said “yo, it’s just a prank, Barbs!” Many people believe the penalty is too soft, saying she needs to be taught a lesson. What do you reckon? Should the law come down harder on her or nah? Will it all blow over in time? Teen years are rougher for some people than others.

It’s hard to believe this girl is just 14. They grow up so fast!