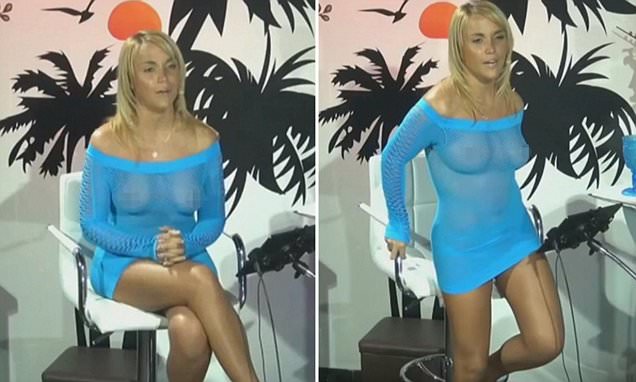 Presenter in see through dress

Having a little sexual adventure in your life can ensure the bedroom antics of a relationship never grow stale, but we can all agree sometimes too much is just too much. This isn’t one of those cases, and I’m confident in stating that.

Twenty-eight-year-old Jenny Scordamaglia is a former model turned television show host who has a reputation for wearing some risqué outfits since her transition to TV back in 2007.

Transmitting from Miami, Florida, it comes as no surprise that she’s willing and able to show off her stunning figure, but this is an episode that’ll go down in the internet history books for teenage boys everywhere. Sporting a short, blue dress with longer sleeves, Jenny either wittingly or unknowingly forgot to put on a bra that morning. The dress itself is strapless so she may have just been out of strapless bras to wear at the time; either way, the lights from the studio ensured her entire audience got a full, unadulterated view of her own massive “golden globes.”

It’s a nip slip that doesn’t even need any slip as nothing above the waist is left to wonder over. She’s either incredibly brave or a semi-advanced exhibitionist one, but does the answer really matter?

The ensemble fortunately (unfortunately?) managed to hide the lower portion of her body, and while the top was illuminated like an angel’s halo she continued on with the show. Seeing how the the dress appears to be fishnet it’s likely impossible that she forgot to wear something underneath, you’re not going to see me complaining about it though. Who knows, maybe next time she wants better ratings she’ll walk out in full lingerie. She hasn’t yet, but she does like to appear naked more often than not these days.

Is anyone else reminded a bit of Kaley Cuoco when they look at Jenny?

Cutesy couples. We all know one. At least one. And you know what, we bloody love ‘em. Don’t get us wrong, they do make us gag sometimes, but they also remind us that all is right in the world and that no matter the ge...