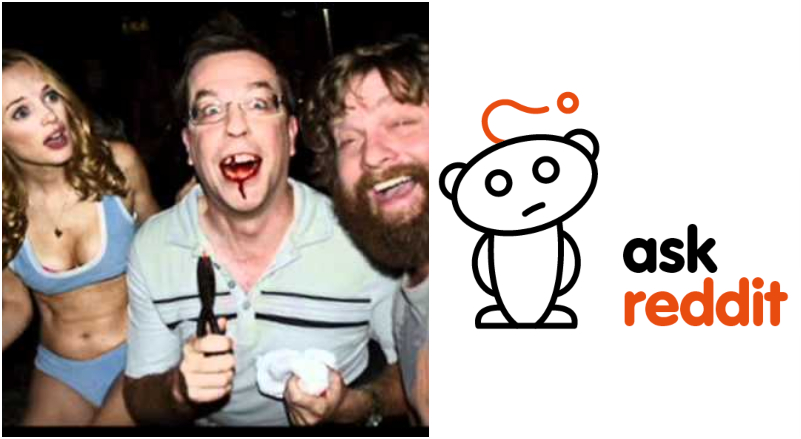 It seems high time we took another deep dark dive into the bowels of the internet via our favourite back passage, Reddit. This time Freddie1909 asks the age-old question “What’s the worst thing you have witnessed on a bachelor/bachelorette party?” Well, well, well, if the walls of strip clubs and footy clubs around the nation could talk!

Back in the day, a bachelor/ette party, or as we tend to call it down under, a ‘bucks/hens night’ was a great celebration prior to a bloke or sheila getting hitched and a way for them to bid farewell to their single years. But in the last few centuries, it gained a reputation as an opportunity for the namesake of the evening to get one last rock off in a stranger before entering into the sanctity of holy matrimony. Despite this dwindling in recent times, it seems bad behaviour is still well and truly on the agenda as we see in the responses to the Reddit thread. For one, I think it’s great, surprising and heartening to see that the gals have as randy a time as the blokes despite being apparently fed lies to the contrary for years. Here are some of our favourite bits.

Our group arrived in Vegas for some pre-scheduled debauchery and drinking at a strip club. The groom’s best man decides to get a dance in the champagne room. He comes back and we head out to gamble and drink some more before retiring to the hotel room. Next morning, while recovering from our collective hangovers the best man’s right eye was as red and puffy like a souffle.

He told us the stripper used his face as washboard during his time with her. The doctor told him he had gotten crabs in his eyebrow somehow and they made their way down to his eye. Needless to say he didn’t play the part of best man.

We still haven’t allowed him to live that down.

Friend’s bachelorette party heads to a grotty strip club, where a particularly sweaty and greased up male stripper takes a drink from the hands of one of the party, puts it on the stage and proceeds to do push ups, dipping his dick into the drink. He’d also just put shaving cream all over himself for some reason, so theres big blobs of that and a film of grease all floating in this girl’s rum and coke, that this bloke has been dipping his knob in and out of- she takes it and downs it in one, and licks around the inside of the glass. Nearly threw up. “Can we move the fruit please? “Credit: The Stag Company

My buddy’s bachelor party was set to be pretty tame. No strip clubs or casinos or anything like that. He just wanted to get these massive burgers from the local burger joint walking distance from his condo and play Beerio Kart 64. So after we had all stuffed our faces from these ridiculous mondoburgers, we sat down, divvied up the teams, and each person would drain one beer per lap, then exchange controllers. Every single person ended up puking immediately. Once the toilet, sink, and kitchen sink were full, people were throwing up all over the place, running around looking for the least damaging spot to spew. It was obscene. At a bachelorette party where the stripper dipped his dick in chocolate and went around to each women expecting someone to give it a taste. Everyone refused.

Me personally, I was in bed by 9 pm with me cup of hot cocoa on my buck’s night! Check out the full thread by giving the link below a Robin Thicke.

[NSFW] What’s the worst thing you have witnessed on a bachelor/bachelorette party? from AskReddit