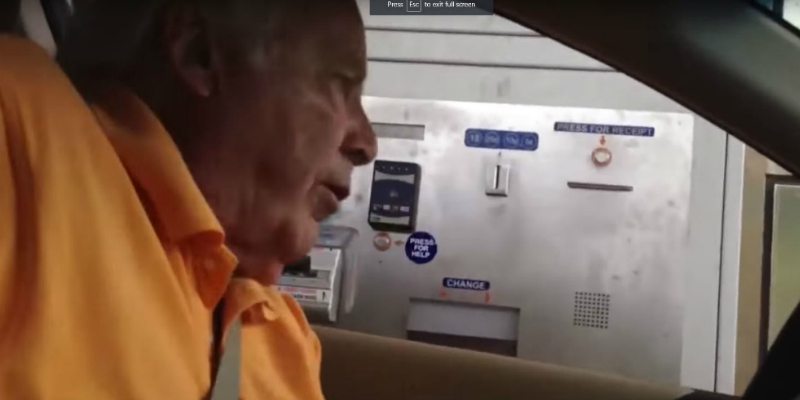 Nobody likes looking stupid in the presence of others – especially on the roads. A video of an angry grandpa has emerged as he struggles to get a toll booth machine to take his money. Despite only lasting 4 minutes, the ordeal must have seemed like an eternity being in the driver’s seat as he liaises with a customer service rep via the help button on the toll machine.

A bit of background for Australian readers. Many places in the US still have old-school toll booths where people pay cash to pass. Known as “turnpikes” after toll points on middle English roads, gatehouses are often manned by humans to accept cash and give change. Now the formalities are out of the way…

In the state of Ohio where this clip was filmed, many turnpikes have a vending machine in place of manned toll booths. This one seems in need of a service though! The gentleman, sporting an orange polo and tight white shorts becomes increasingly frustrated as the machine just won’t accept one of his quarters. The toll is a mere 70 cents leaving many to wonder why the customer service rep didn’t just let him off!

It’s not a case of struggling with technology as such, and the old fella ends up blocking the other cars behind him. At one point during the video, a car behind him honks its horn which makes him lose his bloody cool a little. He has a classic old school manner as he speaks with the rep. He never blames her directly and voices his frustration with the situation overall. It’s a great lesson to learn from others who tend to fly off the handle and become abusive maniacs, which never helps the situation!

However, once he finally gets the gate to open, he takes joy in winding the window up and letting the expletives fly! Such a frustrating ordeal will likely be re-told over and over again with more embellishment as time goes by.