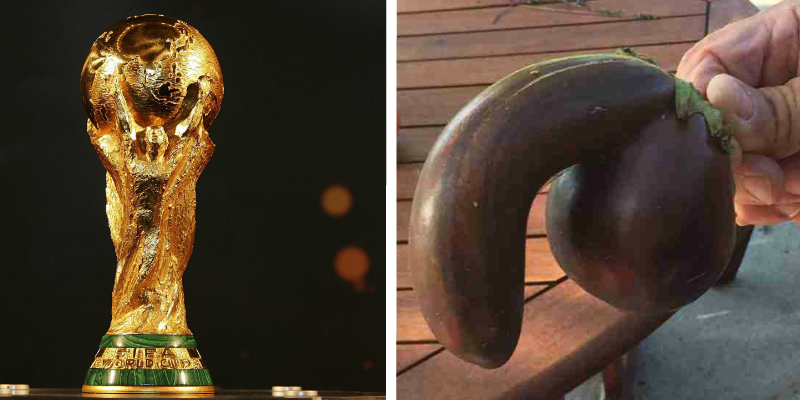 Ladies and Gentlemen, boys and girls, the judges have removed their latex gloves, rinsed off their tape measures and the results are in! The wonders of statistical analysis have again been placed on display in full view for the world to gawk at. And, bloody hell, it’s as if the scientists read our minds! I think I speak for all when I say we hadn’t heard a great deal about cocks in recent times, but the one-eyed-warriors are back on the agenda like a kabana on a smorgasbord.

The visionary team at ‘hims’ have come up with a fantastic set of stats that pit the 32 nations competing in this year’s World Cup well against each other. They decided to poll and undertake a comparison study with results bearing the lengths of members from around the world. At the very least, the results should give some nations a good deal more material to pen some new chants on the back of. How did you measure up? Credit: The Inquisitr

The burning question that is being asked is, with the noticeable absence of Jamaica, who is sporting the largest manhood in the football playing world at the moment. Well, as with all good presentations, it is courteous to mention a few curtain raisers before announcing the big kahuna.

Sitting in last place, coming in at 4.3 inches on a raging stiffy is our good mates over in Japan. Known for being a very respectful people, it is not surprising that so many respondents were honest in their appraisal of their junk. The Swiss, at 5.65 inches stand typically in the middle of the group, not deciding either way whether they want to boast about their downstairs furnishing or not.

Iceland nearly took the prize for this one! The place has an average temperature of negative 150 and the male population appears to be immune from shrinkage! Perhaps the isolation from the rest of the world has given them greater propensity to tell bold-faced fibs! I haven’t trusted them since The Mighty Ducks II and I still don’t to this day.

Top spot went to a more well-recognised country for that type of thing. The tropical, humid climes of South America have evidently given rise to some gargantuan schlongs in Colombia as they swung into top banana position with a startling 6.71-inch average! This length puts the majority of the population firmly in the Magnum dinga market.

And how about the Aussies? Well, we like to keep things low key down here, aye. Average of 5.24 inches… but, down under, we measure from the ankle up!

By Ozzy Man 4 months ago

The big fight day arrived and it lived up to the hype for the most part! I'll save the commentary and critical analysis for the video below that I've made. Firstly, let's go on a quick journey in regards to acce...

Gym Junkie Spends A Fortune To Make Himself Look Older