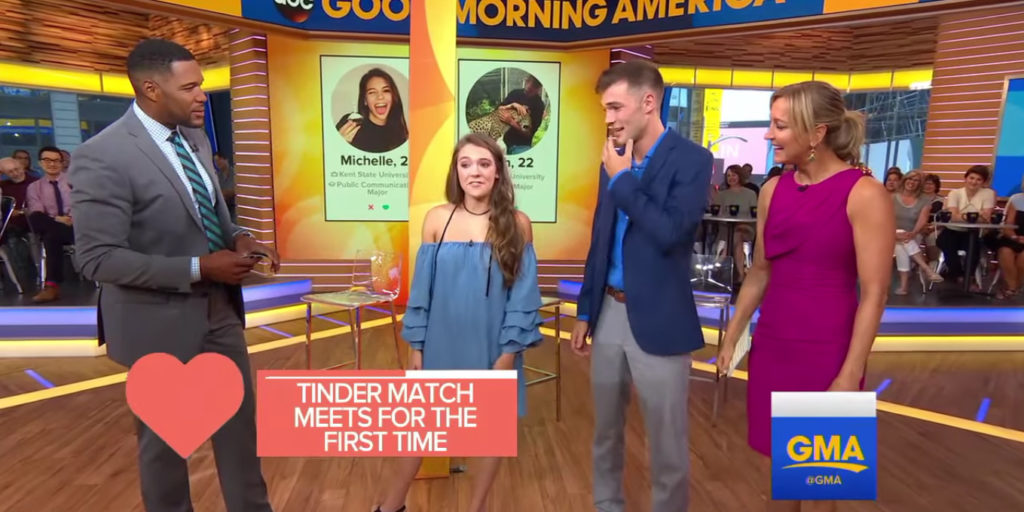 The world of online dating is bloody weird at times. It’s a hotly contested market of people trying to appear better than they really are in an attempt to lure another into action. The nature of competition means these days a simple greeting is unlikely to garner much interest unless you look like George Clooney. This makes Tinder a game of cat and mouse whereby one has to be quite creative in order to engage interest from their target.

This now-couple from Ohio took things to the next level! Michelle Arendas and Josh Avsec struck up a Tinder conversation on 20th September 2014 when Josh opened the conversation with a stock-standard “Hey Michelle”. C’mon Josh you boring bastard, there are guys out there opening with arranged-marriage proposals and you bring that? No wonder it took Michelle 2 months to reply with a tongue-in-cheek response of “Sorry my phone died!”

Thus a monster was created with the two going months without a reply to each other. When they did respond it was a long-winded excuse to explain their absence. Morning TV loves this kind of thing and when Good Morning America caught wind of the story, they teamed up with Tinder to make sure the couple finally met up after 10-odd messages spread over 3 years. In a Perfect Match-esque set-up, Josh and Michelle sat on either side of a divider as they were interviewed by the GMA hosts prior to the big reveal. Josh was looking alright in a pair of slacks and a blazer whereas Michelle opted for what looked to be a blue barber’s smock. The two seemed to enjoy their first meeting. The viewers would have liked to have seen a little bit more on-screen action than just a hug. But there will be plenty of time for that as Tinder has agreed to send the two on an amazing first date to Maui. Not bad huh!

When it comes to culinary delights, we know there are more than a fair few of you out there in the comments section who love a bit of sausage. Deadset, from what we hear some of you aren’t picky at all. Kabana, knackw...

If you look up the symptoms of a hectic case of ‘The Rona’, you’ll be running for the hills. It’s scary, scary sh*t! To boot, the boffins don’t know the full extent of long-term damage it can cause and doctors and nur...