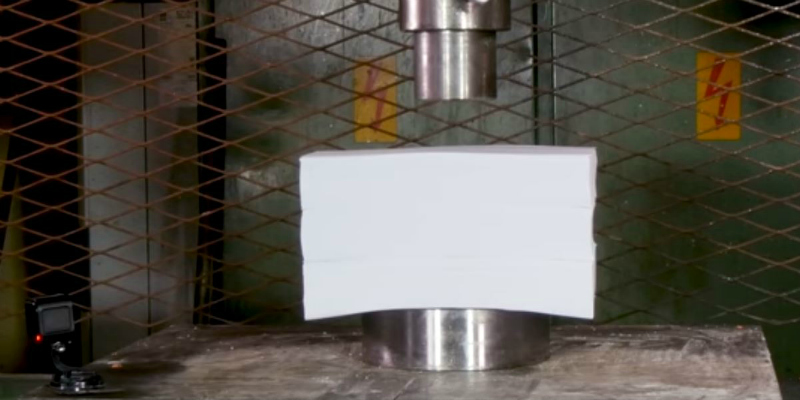 We fair dinkum love the Hydraulic Press Channel on YouTube! An engineer named Lauri Vuohensilta from Finland has garnered 1.7 million followers on his YouTube Channel by crushing various objected with hydraulic presses. Often obtaining spectacular and explosive results, Lauri’s channel is a time-waster’s delight as he crushes anything from bowling balls to Big Macs.

Hydraulic presses gain f*ckloads of downwards force through the buildup of pressure. The science is pretty advanced for the average bloke/sheila, and you definitely wouldn’t want to get your hand caught under the pressing plate! They’re used for a variety of industrial activities such as crushing brittle things into powders, cosmetics or making large sheets of metal for the automotive industry. The below video delivers a fun result when 3 reams of paper are stacked onto the pressing plate. Standing behind a safety panel, the operator is heard to swear in delighted disbelief as he hears a large bang.

The press has imparted so much force to the 1500-sheet stack of paper that it has combined into a solid block. Then that block has become so compressed it just explodes! Lauri’s fair dinkum opinion of what just happened is priceless. He explains that “The paper has been defeated!”. That’s one way of putting it… ‘obliterated’ is another way! He also says that some of the paper feels like plastic or other bits like limestone! Epic.

The reason the paper takes on these qualities is said to be because the paper has some binding agents that are mashed together with the wood pulp during the paper manufacturing process. You probably didn’t think you’d learn anything on the internet today, but here ya go.

Lauri decides to go ahead and press some more ‘pure’ paper to hopefully get a better result. And doesn’t it deliver! A stack of 40-odd napkins is placed under the press and given a hell of a squashing. Check out the full video below. There’s excellent bonus footage too! Science is f*cken awesome.