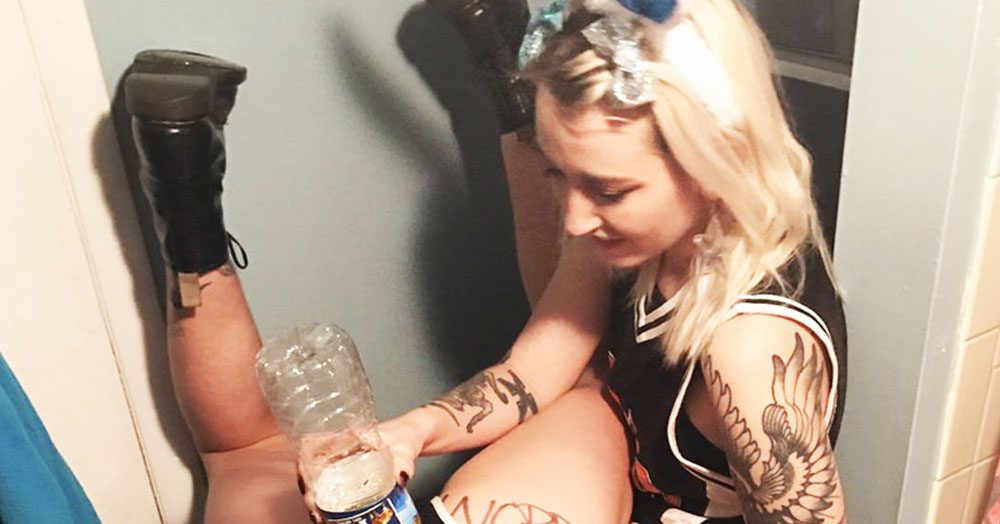 Woman Chugs Mountain Dew Upside Down With Her Butt

Well, I’ve been to my fair share of f*cked up parties, but I’ve never seen a bunny pour some mountain dew down some Sheila’s rectum while doing a handstand. But hey, maybe I’m going to the wrong types of parties. As you can see, this but chugging sheila has ‘two words’ written on her cheeks with some sort of marker. The fact that it’s already written upside down provides some insight that the nights activities were planned well ahead of time.

All I ever wanted, all I ever needed (a fake teen drug scare) pic.twitter.com/CmmzYmb30d

Maybe it’s her party trick. Maybe enemas are in? If they are in then I can safely say that the young kids of today are making me feel old as sh*t. Back in my day we used to just drink beer until we vomited and passed out. F*ck, that’s still the plan this weekend. The only feasible rationale I could come up with while watching this was that the caffeine in the mountain dew might hit the bloodstream quickly giving a jolt of energy. It looks like the butt chug has turned into a bit viral phenomenon as well! As you can see, there are a few other fun party ladies who have taken up the challenge. The video even hit the mass media with a number of ratio stations giving a play by play break down of the footage.

Twitter also had a bit of fun with the latest pepsi controversy.

Classy ladies all round! BTW someone please DM me the location of these parties!

CHECK OUT THE MOUNTAIN DEW BUTT CHUG BELOW